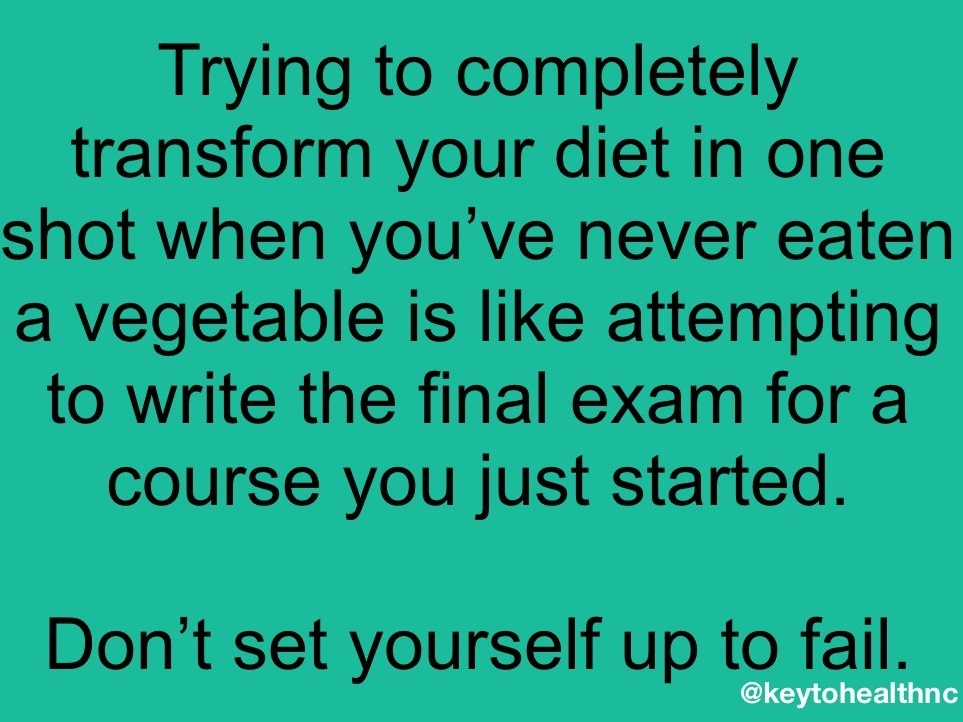 Why do so many people fail when they try to switch to a healthy diet?

Most people fail because they take an all-or-nothing approach.  They try to make drastic and unrealistic changes that are too difficult to follow through with.  Some people can never bring themselves to even start a new diet much less follow through with one because just the thought of it is completely overwhelming.  They fail before they even begin.

And I don’t blame them.

It’s not easy to give up ALL of your favourite foods all at once.  Most people don’t have that kind of willpower.  So they keep procrastinating and continue to make the same new year’s resolution every year only to put it off every year.  They know all those sugary treats and fast-food burgers are going to catch up to them sooner or later (if they haven’t already), but they just can’t bring themselves to do anything about it.  Or they try that new fad diet (again), and fail (again).  They just can’t seem to find a healthy diet that they can stick to.

How do you break the cycle?

The key is to take baby steps and change your habits one at a time.  It’s much less daunting to start with one change vs revamping your entire diet.

If you weren’t very fit but wanted to run a marathon you wouldn’t go straight to the marathon, you’d start with a daily 15 minute jog…then bump it up to 20 minutes when you’re ready…then 30…

The same principle applies to your diet.  Set yourself up for success by making changes you can actually stick with.

How do you set yourself up for success?

If you want to make lasting changes to your diet then start small.  Begin by swapping one unhealthy snack for a piece of fresh fruit.  Instead of eating that candy bar or bag of potato chips mid-day, make a commitment to eat an apple instead (or any other fruit of choice).  Then try adding a side salad to your lunch every day.  You don’t have to eat a completely different meal, just add the salad and make sure you eat it first before you fill up on the rest of the meal.  Once that salad has become a habit swap your entire lunch for a healthy meal.  Then another snack…then another meal…

Once you start noticing how much better you feel when you eat healthy foods you will be motivated to make even more healthy changes to your diet.  Not just temporary changes, but lasting habits.  One healthy habit will lead to many more, and before you know it you’ll be craving salads instead of doughnuts, rather than wishing they tasted like doughnuts.

View all posts by keytohealthnc

Attention Parents:
If you want to raise healthy, thriving kids but you’ve been lacking the proper guidance and support...
Whether you realize it or not, you make thousands of decisions a day. And by the end of the day, most people have decision fatigue.
Do you find yourself wanting to feed yourself and your kids a healthy home-cooked meal but then....life happens?
If you or your kids have ANY chronic symptoms then listen up 👂🏽.
No really, why does this term even exist?
Loading Comments...
Comment
×
%d bloggers like this: